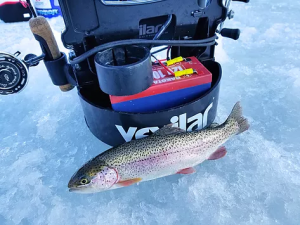 My Fish finder lasted over 41 hours on a single charge. I used a DL 12v 10Ah battery.

After most trips on the ice in the past, I would usually put my Vexilar on the charger since the typical 12-volt battery will last around 14-16 hours at full power and I didn’t want to run out of power after a few trips.

For most of this season, I’ve been using Dakota Lithium Outdoors’ new lithium battery, which has dramatically extended how long my Vexilar will last. When I first got it, I decided to see how long the battery would last before it was spent. I started using the battery in January and went out at least once or twice a week, usually for about 4-5 hours per trip.

After nearly two months of not charging the battery, it was finally spent near the end of February.

After checking with my timekeeping chart, the battery had lasted just over 41 hours! That’s an incredible amount of time for a battery to last.

I could have fished with it for 8 hours a day for nearly an entire week before it died! The longevity alone makes these batteries well worth it, but throw in the extreme lightweight of them and you’ll be amazed how less tired you feel when moving your flasher around all morning or all day. If you haven’t seen these batteries yet, be sure to check them out.