Joe Thody started fishing before he could even walk. During his youth, he learned about the outdoors from his grandpa, who taught him endless knowledge about fishing and hunting. He did a lot of bank fishing, creek fishing, and spillway fishing while he was younger, but as he entered his college years he started getting into ice fishing and later kayak fishing. Last year he ran his first ice fishing tournament Kayakers on Ice, which was sponsored by Dakota Lithium. Here’s his story: 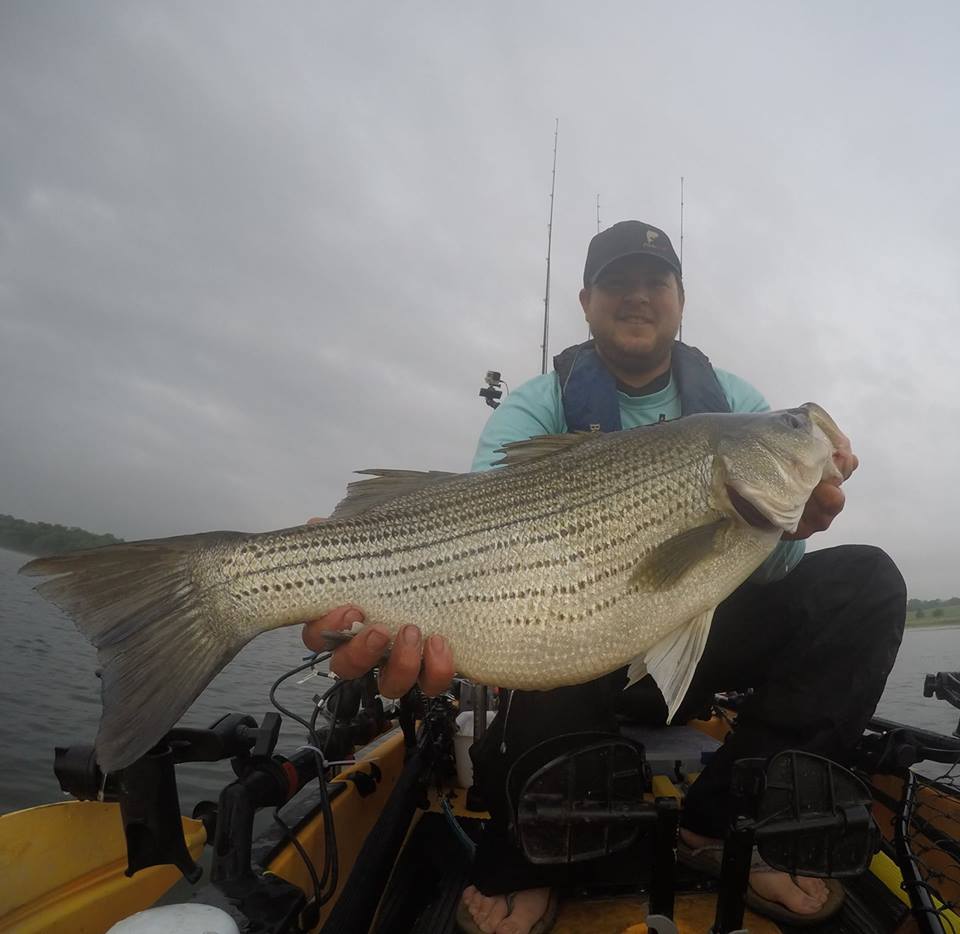 Joe Thody coming in hot with a big catch while kayak fishing!

Which style of fishing did you get into first? Ice or Kayak?

I only ice fished occasionally when I was younger, but really got into it during college.  My buddy invited me on a trip fishing for pike with tip-ups. I had never caught a pike and never caught a fish on a tip up.  I was in for an eye-opener. We were greeted on that trip by a nasty storm, where we got about 2″ of rain, which turned to snow later in the day.  I just had old hunting boots and a regular pair of insulated bibs. I was soaked, and by the end of the day, I was the coldest I can ever remember being.  Feet soaked to my ankles, and bibs drenched from kneeling and pulling countless pike through the ice. It still gives me the shivers

I bought my first kayak in 2015, an Ascend FS12T.  The same culprit that got me hooked on ice fishing, had gotten me hooked on fishing out of a little plastic boat.  The year we both fished quite a few tournaments, traveled all over the place fishing from our kayaks. The next year we got into fishing tournaments, and after both doing well, we both qualified for the Tournament of Champions at Lake Fork in Texas.

“I never have to worry about my flasher dying anymore, and no longer have to be mindful of screen brightness or shutting it off when I’m moving to conserve battery.”

How do Dakota Lithium batteries help you while fishing on ice or while on your kayak?

As my ice fishing styles have evolved, I’ve become a very mobile fisherman.  I rarely fish out of a shack, and with our winters in Nebraska, we don’t use ATV’s on ice much.   That being said, it’s important when fishing this was to pack light. A small sled, and a little bit of gear.  The most important tool in an ice fisherman’s arsenal is his flasher or sonar. This locates not only the depth of the lake, but the fish, and even your lure.  Most ice fishermen won’t fish without it. Behind this essential piece of machinery is a 12v battery that powers it. Generally, they come with a 7Ah or 10Ah SLA battery.  Heavy, poor cold weather performance, slow charge times, and worst of all for me, unreliable, and poor battery life. On some trips, I will fish sun-up to sun-down, sometimes 12+ hours a day. There’s nothing worse than your flasher battery dying just when the fishing is getting good.

The lightweight and extreme performance of a Dakota Lithium is exactly what I needed.  Dropping 2 pounds of my flashers weight was amazing. I carry that flasher from hole to hole all day long.  That 2-pound difference is huge. Having the insurance of extra battery capacity, and the supreme voltage curve of a lithium battery is awesome. I never have to worry about my flasher dying anymore, and no longer have to be mindful of screen brightness or shutting it off when I’m moving to conserve battery.

In my kayak, I run more electronics that consume a great deal of power.  And being a summertime, I can be on the water upwards of 14 hours a day.  I have two 10Ah Dakota Lithium batteries installed in my Hobie Pro Angler 14.  Many times I can go two days without needing to charge these batteries. On trips where I am camping, and don’t have access to a power supply to charge these batteries, this can make a huge difference. 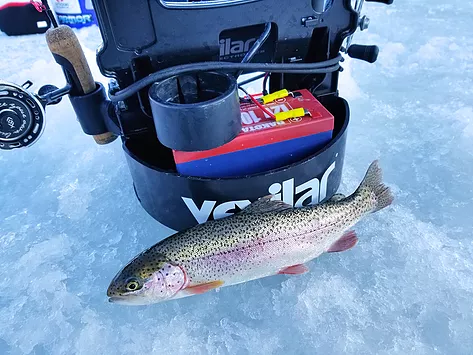 The Dakota Lithium 12V 10Ah battery is the perfect companion for your fish finder.

Tell us more about your tournament, and what entrants can expect this year.

This is our second annual Kayakers on Ice fishing tournament.  We use this tournament as a fundraiser for our local chapter of Heroes on the Water.  Heroes on the Water is an organization that introduces armed forces veterans, active duty members, as well as first responders to the sport of kayak fishing.

With a portion of tournament entry fees, last year we were able to donate almost $500 to HOW.  We had 42 teams competing last year, and expect around 50 this year. We have a pretty unique tournament format, that we received a ton of positive feedback for last year.

We took many aspects of the kayak fishing tournaments and put them to use on the ice.  We use a CPR, or Catch-Photo-Release format. Anglers use an approved bump board measuring device, and their smartphone to take pictures of their catch.  This format stays away from the normal format of weighing fish and promotes catch and release, and selective harvest. Of over 1000 fish caught by our angler last year, we only recorded 99 fish being harvested.

At the end of the day, they take their best catches and submit the photos to us and we build their stringer.  We take their best 5 crappie, 3 bluegill, and a bonus fish, and tally the totals for all teams. The team with the longest stringer will be named the winner.  We have had great help from our sponsors the past two years, providing some awesome prizes for our teams. It certainly peaks peoples interest when they have the chance of these awesome prizes, and I think it greatly helps our attendance.

What is your favorite memory from last year’s competition?

At the end of the day, we had a ton of happy anglers.  Lucky for us, the fish were biting, and almost every team had a full stringer of fish.  Upon check-in, or weigh-in, we had a ton of compliments on how they loved the format of the tournament, and how well it was run.  This was great to hear from so many, being my first time running a tournament.

Seeing the format work this well, and to see that SO many fish were release was awesome.  I’m a firm believer in selective harvest, and the weigh-in harvest style tournament do the exact opposite of that.  The teams all harvest the biggest fish they can catch, and remove them from the water body. I believe this could be very detrimental to a fishery.

Where can people find you online?

After kayak fishing for a year or so, my friend and I decided to start a Facebook page and YouTube channel to chronicle our journeys.  Filming and editing the videos is a lot of fun, and I love to be able to go back and look at our past trips.

How Long Will My Battery Last in My Fish Finder? Testing Results by Rich Lemmer of HSM Outdoors